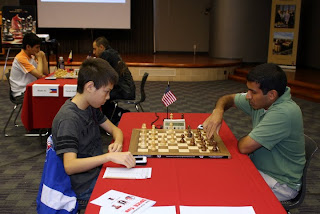 Bay Area native Grandmaster Vinay Bhat has spent this month traveling around the continent to compete in elite invitational round-robins, seeking the experience necessary to raise his game to the next level. Considering his pedigree as a former record holder of youngest USCF master (at age 10), Vinay has already demonstrated the talent to succeed at the highest level of chess. Yet despite earning the Grandmaster title last year, his current FIDE rating of 2474 is still low for a player of his skill.

First, Vinay played in the Montreal International beginning on August 27. He finished with a solid 5.0 out of 11 as the lowest rated participant. He faced opponents rated an average of 2628, about 150 points above his own FIDE rating, and scored three wins and four draws against four losses. Highlights include a shocking miniature versus reigning US Champion GM Yury Shulman, a successful sacrificial attack against the veteran GM Sergei Tiviakov and a solid draw as blac

This week, Vinay attends the SPICE Cup Invitational in Lubbock, Texas, where he plays in the "B" Group. This time he is the third lowest rated out of ten players, with an average rating of 2503 FIDE. After three rounds, he is tied for second place with an undefeated 2.0 out of 3, including the following tactical win today against the talented teenager IM Ray Robson. Check it out in the game viewer below.

Vinay, here's wishing all the best in your chess travels!

Question is "Was Bhat setting up Robson in that endgame to skewer Robson's Queen" ? If Bhat was , this one of the finest endgame setups I have played over in modern chess.

Your ches blog is second to none.

Even though I live on the East Coast, I enjoy your coverage of the California Chess scene.

Especially noteworthy is your coverage of the young chess talent on the west coast.

I don't know if Vinay intended to skewer the Queen, although I'm sure he saw the idea several moves earlier. When I was watching the game live, I also saw Qh1 well in advance, but only as a way to win the g2 Rook. Either way, White is clearly winning.

Thanks for visiting my blog.