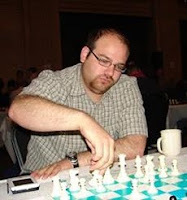 Over the years, GM Josh Friedel built his reputation not only as one of the nicest young adult players around the country, yet also as one of the meanest competitors that you could ever face across a chess board. In case IM Marko Zivanic of Dallas did not know before Wednesday night, I rest assured that he knows all too well now. This week's miniature earned Friedel the Game of the Week honors for the US Chess League! Thanks to Mechanics' Institute Chess Club director IM John Donaldson for providing the annotations below.

Check out Josh's cool website! He has written many interesting stories for Chess Life Online about his chess travels around the globe, including this recent article from Sao Paulo, Brazil. Within the past 24 hours, Friedel learned that he has been officially invited to play in the FIDE World Cup (knockout championship) in Khanty-Mansiysk, Russia beginning on November 20. Kudos on this high honor!