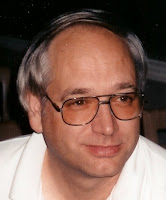 I don't like posting such sad news on my blog, but make an exception to reflect on the life of a true gentleman and dedicated fan of the royal game. Most of us knew Jay Blem as tournament director, bookseller, demo board helper and simply as the guy with all of the answers. He would strike up a friendly conversation with anyone, whether about chess, sports, politics or just about any other topic. Readers of this blog may remember him as the bookstore guy and assistant TD in Reno; he also sold books at Bay Area tournaments in the 1990s and early 2000s. Jay Blem was just 51 years old when he moved on to a higher chess board, a life taken way too young.

I knew Jay for at least 10 years and always enjoyed the opportunity to chat with him in Reno or in Los Angeles. He was often the first chess player that I would meet after arriving at a tournament. Frankly, he will be missed a lot and by many!

Please read this obituary written by his sister at the Southern California Chess Federation website. A memorial service is scheduled for October 11 in Ontario, CA. I anticipate another tribute to him at the upcoming Western States Open on October 23-25.

To close, I compiled the following quotes from the USCF Forums and Facebook:

Posted by Michael Aigner at 9:31 AM

Thanks for posting the photo and the text. Yes; Jay was indeed a very nice person. As a chess-parent, I have met him many times at the chess tournaments and he would always greet with a smile.

It wont be the same...Jay always added something pleasant to a tournament experience., yes, he will be missed .
Zoran Lazetich

Thank you all for your kind words and admiration for my brother Jay. He was truly blessed and a blessing, yes he will be missed, I can hear his laugh as I write this....
Sheri Blem Reneau

I remember him. As a 17 year old boy, when I used to go tournaments in the vicinity of the LAX area I used to see him constantly selling books. I always thought he was highly intelligent and very entertaining to listen to. I used to even sometimes sell him my old used books and with the money he gave me buy myself a delicious lunch or dinner. I liked him and enjoyed listening to and sometimes even chatting with him. I thought he told great stories and listened to him raptly when he talked about either politics, or about Kasparov's blunder vs deep blue, or even how he wanted to go into law enforcement but then decided not to since the majority of police work is to go around writing reports all day. I also recall a story he told about how John Nunn corrected Fischer's book but ended up humiliating himself because his corrections were riddled with errors, and particularly this one time he claimed that a certain move was wrong. however, there was a check there and this little 18 move thing that proved the variation correct. It was always a delight to see him at tournaments and I will always have fond memories of him.