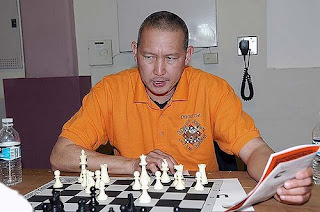 (IM Ricardo DeGuzman won all of his games at the Thanksgiving Festival.)

The Bay Area Chess Thanksgiving Festival attracted about 150 players for mental exercises to burn off all the calories from turkey dinner. One IM, one NM and two former masters headlined the field in the top section. The venue at an office park in Milpitas was amazingly comfortable; the higher rated players were distributed throughout several smaller rooms surrounding the bigger main room, each with a door to minimize noise.

The playing schedules included options for 1-day (Friday only), 2-days (Saturday and Sunday) and all 3-days. The 1-day swiss saw 77 juniors compete for trophies in five sections ranging from U1400 to U500. Another 63 players chose the adult tournament, with about 2/3 choosing the faster 2-day schedule (three games of G/60) over the leisurely 3-day option (all six rounds at 30/90, SD/60). The organizer paid out about $1900 in prizes, 64% of the advertised amount. Smaller side events included a scholastic blitz tournament on Friday afternoon and scholastic quads on Saturday.

The competition in the Master/Expert section went according to form with the top five rated players finishing in the money. Top rated International Master Ricardo DeGuzman (2430) was never seriously threatened all weekend, sweeping the field with an impressive 6-0 score. Your humble reporter, NM Michael Aigner (2272), took second place at 4.5. Check out the game viewer for the game that decided the top honors.


Five players shared third place and the U2200 prizes at 3.5 points. Former masters Mike Splane (2196) and Dana Mackenzie (2120) combined for a solid 5.5/6 against lower rated juniors but only could score one draw in four games against the two masters. Teenage expert Evan Sandberg (2030) also tied at 3.5 after a disappointing last round draw.

Kudos to the two juniors who shared the U2200 honors: Brian Wai (1755) of Saratoga High School and 7-year old Samuel Sevian (1833). Wai (see photo at right) calmly defeated three of the top five Bay Area prospects under age 12 (all rated between 1830 and 1950), drew with Mackenzie and lost only to IM DeGuzman and this writer. After this 2150+ performance, his rating shot up nearly 100 points to 1850. Sevian, already rated #1 in the nation for age 7&under, joined the big tie at 3.5 by vanguishing two young A-players and drawing with expert Sandberg.
The following list shows the winners of each section at the Thanksgiving Festival plus the player with the largest rating gain (excluding provisional ratings).

Perhaps the greatest disappointment of the weekend was the complete lack of participation by Bay Area adults. Only a dozen of the 63 players in the main tournament were over the age of 18. Where did all of the Bay Area adults go and why would they skip a slow time control event?

While the decline in local adult chess may be traced to the natural advantage of juniors at the popular G/45 and other fast time controls, this reasoning certainly doesn’t apply to a leisurely event at a 30/90, SD/60 time control. In fact, the four adults in the Master/Expert section (out of 17 players) combined to score a lopsided 10.5 out of 11 against the lower rated kids! And while a junior won Class A/B, four out of the six adults in the section still gained rating points. If there was an event for adults to match wits against the talented juniors, then seemingly this was it.
Posted by Michael Aigner at 1:36 PM