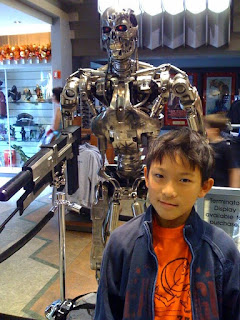 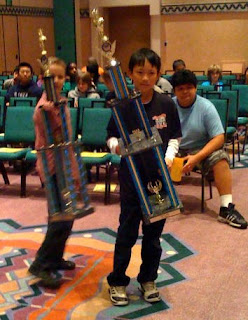 Perhaps California governor Arnold Schwarzenegger played "the Terminator" in the movies, but San Francisco's Kyle Shin deserves that nickname at the chess board. He survived the jungle of upsets in 5th Grade at the National K-12 Championships in Orlando, not by firing an Uzi but by confusing his opponents with a hail of tactics. Somehow, he was the only of the top six seeds to survive the first two days of competition unscathed at 5-0.

Talented Kyle finished near the top in previous years, but this time his final score of 6.5 out of 7 was sufficient for undisputed first place! Having fulfilled one chess dream at the Magic Kingdom, Kyle's next goal no doubt should be to bring his 1923 USCF rating up to expert level. What are you waiting for? Go get 'em dude!

Check out these two highlights from Orlando. (Thanks Kyle!)