Gregory Young Set to Play in US Cadet (U16) Championship

The field for the 2008 US Cadet (under 16) Championship has been announced by FM Tom Brownscombe. This 8-player invitational round-robin will take place side-by-side with the US Junior Championship from June 14-17 at the Anatoly Karpov International School in Lindsborg, Kansas. The ratings below are current from the MSA website. 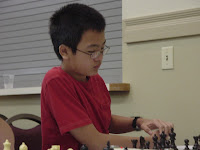 A number of other deserving kids declined to play in this event for two reasons: 1. they were invited to play in the US Junior instead or 2. they made plans to attend a seminar with Garry Kasparov in New York City on the same weekend. Our local star, FM Danya Naroditsky, falls into the second category. I think it is really a shame that such a conflict could not have been worked out by our leaders in the USCF, especially considering that both events were on the calendar since January or earlier. I'm afraid that Kasparov versus Karpov politics were at play again.

Good luck to Gregory as he takes on a tough field of underrated juniors! Looking at both the ratings and ages of these players, I would expect to see a two horse race between Gregory and Darwin Yang. Most pundits will probably give Darwin the inside track, but I know that Gregory will do everything he can to bring home the national title.
Posted by Michael Aigner at 5:01 PM