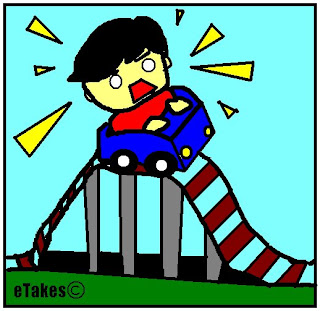 Now that I am back home in California, I can blog about the roller coaster of emotions that I had experienced during the last round of the Chicago Open. Both my opponent, NM James Lewis, and I were tied for 2nd place before the game began and had a lot to play for. In fact, it became apparent after 3 hours that the leader, NM Gylfi Thorhallsson, was in deep trouble and that the winner of our game would share the $5000 top prize.

At that point, our pivotal contest transformed from a quiet positional struggle into a tactical melee filled with missed opportunities. On move 39, I accidentally left my b3 pawn en prise and, as Fritz points out, I overlooked the combination beginning with gxf5 that I would play later. Now having already snatched one pawn, Lewis will regret not finding the decisive 40... Qc5 (there's no useful way to defend the c3 pawn) on the final move before time control, with about half a minute left. Having dodged one bullet, I became concerned by move 50 that I had walked into a losing endgame, despite temporarily being two pawns ahead. I found the resource 51.c4 but overlooked the obvious continuation 52.c5 (threatening to push all the way), instead allowing a drawn rook endgame after 52.Nb5 Bxb5.

Considering my poor start, I must be content to have finished with an undefeated 5.5 out of 7 after reentering. The share of 3rd place was my second biggest payday at a chess tournament, coincidentally behind another Chicago event: the 2006 US Open. Sadly, my opponent and I can both lament the multiple blunders that cost each of us over $2000, which was the difference between a share of 1st place and the 4-way split of 3rd place. On the bright side, I met and socialized with many people whom I don't see frequently at west coast events or whom I only know from ICC.

In other news, GM Varuzhan Akobian of Los Angeles, GM Tigran Petrosian of Armenia (not the 9th World Champion) and GM Hikaru Nakamura of New York shared the top honors at 5.5/7 in the Open section, with "Var" winning the Armageddon playoff. Yes, Grandmasters in the 21st Century actually have their own personal websites! For a first-hand impression of playing in the Open section, I highly recommend the articles by Ohio teenager Jonathan Hilton on Chess Life Online (first story and second story). 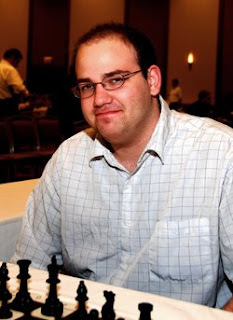 Of course, my fans in California will be eager to know how GM Josh Friedel ended up. Please note my proper use of title: Grandmaster Josh Friedel!!! (Photo at right by Betsy Dynako.) Congratulations dude on scoring a third norm at the US Championship last week and the minimum 2500 FIDE rating just a few days later! After a long history of American Grandmasters being born overseas (notably Russia and former Soviet republics), Josh became the second native son in a year to earn the top honor in chess. Will Josh concentrate on teaching or does he have ambitions to achieve 2600 FIDE?

My final kudos goes to teenager Rohan Agarwal for a master level performance of 4.0/7 in the U2300 section. Rohan's result is even more impressive considering that he faced five masters (including one IM) and two preteen experts. His rating continues to climb, now up to 2136.
Posted by Michael Aigner at 10:04 PM