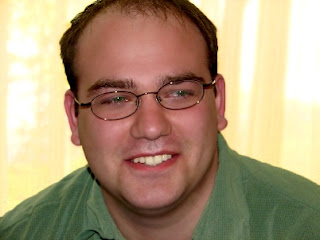 (Photograph of IM Josh Friedel from the official US Championship blog.)

I just spoke with IM Josh Friedel on ICC and confirmed what has been reported in the rumor mill. Playing in Tulsa at the US Championship, Josh now stands a half point away from his third and final Grandmaster norm. His pairing tomorrow is a dream: white against GM Yury Shulman, who needs just a draw to clinch 1st place and the title of US Champion. Since both players will benefit greatly from a draw, I think the only remaining question is how many moves they will play? Will Josh be the first to congratulate Yury?

Stay tuned tomorrow at 12:15pm PDT for the final round of the US Championship. Games will be broadcast live on both ICC and MonRoi. My apologies for not covering the US Championship more, but I was swamped and sleep-deprived over the weekend with the CalChess Scholastics.

Update on Wednesday at 12:30pm: Josh Friedel and Yury Shulman played 11 moves in the exchange French before they agreed to a draw. Congratulations to US Champion Yury Shulman and to Grandmaster-elect Josh Friedel! I expect to post more on the US Championship later tonight after all games finish.
Posted by Michael Aigner at 8:07 PM