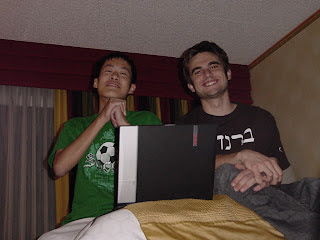 (Michael Zhong and Sam Shankland share a lighter moment late on Sunday night in my hotel room after picking up their large prize checks.)

Led by the exuberant teenager Sam Shankland, a small yet highly talented group of Northern California juniors left their mark on the top sections at the Pacific Coast Open in Agoura Hills (near Los Angeles). Three local kids took 1st place in either their division or class prize, each winning over $750. Two broke major rating milestones this weekend. Two scored against Grandmasters (one win and one draw).
Click here for the USCF rating report.

Congratulations to all four juniors for an impressive tournament! Of course, the key to a successful weekend is to win the final round, something which these kids did better than I did. Sadly, I lost miserably on Sunday night to FM Joel Banawa to finish at 50%.

In other news, FM Danya Naroditsky started with an undefeated 2.0/3 in the Czech Open tournament in Europe. He has two draws with 2400+ FIDE rated opponents and is paired with yet another strong player today. His brother Alan Naroditsky also has 2.0/3 in the "Open B" division. Click on this link for daily results from Pardubice, Czech Republic. Update after round 4: Danya drew another 2400+ while Alan won.
Posted by Michael Aigner at 6:06 AM

Congratulations to Sam on your GM scalp, to Michael Z on your first place U21, and to Yian for your newfound expert title! Good job all!

what is that hand gesture that shankland is doing in the picture?

That photo was a bit inappropriate for this family oriented blog. I apologize for failing to exercise proper editorial judgment. I have now replaced the photo with a slightly different one.