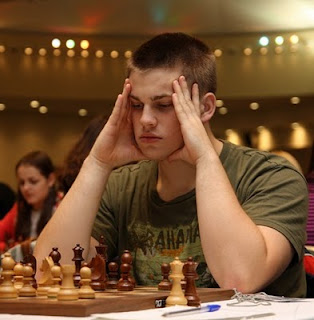 I woke up early today just for this special moment. I logged into the official World Youth website and saw the final moves. Frankly, I couldn't believe what I was seeing; perhaps I wasn't awake yet. Alas, I woke up just in time to see my student become undisputed World Under 18 Chess Champion. Within 32 short moves, Steven Zierk crushed a 2495 rated Azeri Grandmaster, his fourth straight victory at the end of this two week long tournament.

Merely four years ago, Steven was a retired 1500 rated middle school player who played chess off and on as a hobby. Those who knew him already saw his talent back then. With a little motivation and guidance, Steven reached 2100 in the first year and 2300 in the second. Today, he stands as the newest International Master in the country, plus with a valuable Grandmaster norm to boot. His performance rating is a mindboggling 2723, more than 100 points above the GM norm requirement! Steven becomes the third Bay Area World Youth champion in four years, joining Daniel Naroditsky (U12) in 2007 and Sam Shankland (U18) in 2008.

What else can I say? Congratulations Steven! I am really proud of you.

Two other Americans won medals this year. Kudos to Kayden Troff of Utah, who was leading U12 for most of the tournament. He took home the silver medal after losing a crucial round 9 pairing. More kudos to talented youngster Jeffrey Xiong of Texas for winning another silver medal in U10. Click here for the complete results for Team USA.

Posted by Michael Aigner at 4:29 AM

Thank you Michael! I certainly wouldn't have gotten this far without all the coaching and support you've provided over the years, since over half my life ago. We hope to have you back on the tournament scene as soon as possible. We miss you!