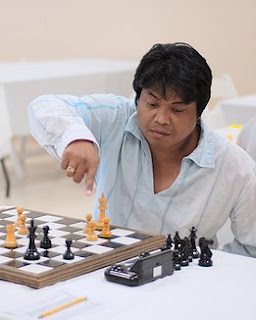 Thanks to NM Ankit Gupta for sharing this news.

The Los Angeles Metropolitan Chess Club will host an IM norm invitational next month. This ten player round-robin will be the first such event in LA for five years. The nine rounds are spread out over consecutive weekends (November 12-14 and 20-21) at the California Market Center on 110 East Ninth Street in downtown LA. The time control is 40/90, G/30 with an increment of 30 seconds from move 1.

The average rating of the field is 2338 FIDE, which makes it a respectable Category 4. Players must score 6.0 out of 9 to earn an IM norm. The field includes three International Masters: Enrico Sevillano (see photo at right), Tim Taylor and Zhanibek Amanov of Kazakhstan. Most of the norm seekers are role players for the Los Angeles Vibe team in the US Chess League: Roman Yankovsky, Alexandre Kretchetov, Tatev Abrahamyan, Joel Banawa, Jouaquin Banawa, Konstantin Kavutskiy and Ankit Gupta.

Metro Club director Michael Belcher hopes to organize more international tournaments in the future. Any readers with interest in such norm tournaments in the future (either IM or GM norm tournaments) should send an e-mail with subject "METROCHESSLA" to Michael Belcher at td(at)chess(dot)com and Ankit Gupta at gupta.ankit.h(at)gmail(dot)com. You will receive more information from the Metropolitan Chess Club mailing list.
Posted by Michael Aigner at 4:20 PM