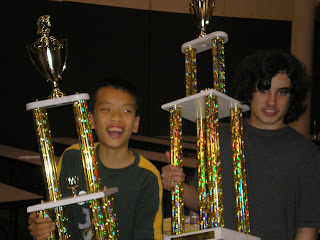 The reason why I did not post the results from the last weekend's CalChess Scholastics is because I am overwhelmed and speechless. In 2006, three of my students took first in three different sections. This year, I have an amazing five CalChess champions! Woot!
Yian, a precocious 6th grader from Alamo, continued the local trend of kids playing up and then winning the K-12 section! In the final round, he defeated defending champion FM-elect Steven Zierk to claim his share of the title. He also beat third seed Adarsh Konda on the road to victory. After his recent results, including a pair of wins against my nemisis IM Ricardo DeGuzman, it seems very likely that Yian will become the next local master under the age of 18. He is also a bundle of energy, as became apparent after the last round when he joined my older students in bughouse.

James, Daniel and Neel represent some of the brightest young talents in the Bay Area. James is the veteran of the group and is co-captain of the 2009 National K-6 champion and 5-time state champion Mission San Jose Elementary team. Neel flew in under the radar, saving his best for the biggest weekend of the year. Daniel is the new kid on the block; he was rated in the 800s just 18 months ago, gaining 1000 rating points since!
Here are the captions for photos below, from left to right: 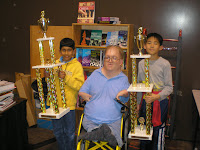 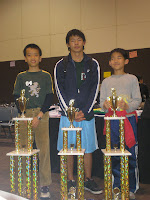