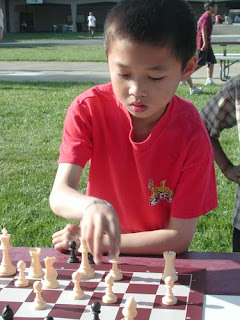 Nicholas Nip has broken the US Chess Federation's record for the youngest master at the tender age of 9 years and 11 months, shattering the previous record of 10 years and 79 days held by Hikaru Nakamura. His new rating on the MSA website stands at 2207. Nicholas earned the final 20 rating points on March 5 in a G/60 quad tournament at the Mechanics' Institute in San Francisco, defeating FM Ron Cusi (2339) in the climactic game.

The youngest master record is considered one of the most hallowed marks of the USCF. Future World Champion Bobby Fischer was considered a prodigy when he became a master at the age of 13. The rise of computers and prominence of scholastic chess has pushed this record younger and younger. In 1995, two young rivals from the Bay Area earned the master rank before their 11th birthdays. Jordy Mont-Reynaud did it in 10 years and 209 days and then, merely a few months later, Vinay Bhat shaved yet another 33 days off the record. Future Grandmaster Hikaru Nakamura lowered the mark almost another 100 days in 1998, a record that nobody has come close to touching until today.

Much of the credit for Nicholas' rapid improvement from a talented yet inexperienced first grader in 2005 to National Master goes to his supportive parents who travelled with him and coaches Liina Vark and Eric Hicks of Academic Chess. The teachers identified his potential in kindergarten and developed it with tender nurturing care over the years. Hicks has told me several times over the years that one reason Nicholas improved quickly is his ability and desire to study on his own, often with the help of a computer. Certainly those of us who have witnessed his meteoric rise first hand can attest to Nicholas' love for the game of chess. He would always be eager to hang around chess players and he quickly became a favorite of many older children at the Mechanics' Institute.

What does the future hold for Nicholas? The fact that he has already defeated nine (9!) different established masters, including this writer, at slow tournament time controls bodes very well. He also has a solid FIDE rating of 2143 which will surely increase over time. Perhaps it is the pedigree of former youngest masters that offers the most hope for the future for young Nicholas. Here's wishing you all the best!

(Photo of Nicholas giving a simul at the 2007 CalChess Scholastics from ChessDryad.)

Boogie on over to my blog at www.danamackenzie.com/blog to see the game I lost to Nicholas in 2006, when he was all of 8 years old. I am probably not on Michael's list of 9 national masters who have lost to Nicholas, because my rating is currently below 2200. However, it has been over 2200 in the past, and I have the National Master certificate to prove it. So make that ten (or more!) masters that he has beaten!

First of all, thanks Dana for dropping by. I have added a link to your blog on my right side panel. I love adding links to interesting Northern California chess sites.

Second, you make a great point. There are several players who may have been under 2200 at the time they faced Nicholas, but who have been a master in the past or became one since. Nicholas has wins against former masters Romulo Fuentes (quite a few), Igor Margulis (3), Kimani Stancil and Dana Mackenzie plus draws against upcoming masters Sam Shankland and Daniel Naroditsky.

Nip's accomplishments are nothing short of prodigious, and have undoubtably inspired many rapidly improving youth players.I was however looking at one of his games. Schiller vs Nip(2007). I could not help but notice the poor quality of play on Schiller's behalf. I understand that players are apt to make blunders but Schiller made some rather shady moves, in that he appeared to not have been ardently pursuing a win.Schiller blunders a pawn on d6 in a seemingly arbitrarily manner.Nip's match play has been quite phenomenal. His match against
Romulo C Fuentes garnered an astonishing performance rating of 2500. With all due respect to Mr. Fuentes, one cant help question the conditions under which this match was played.Is Nip's playing strength genuinely on par with an IM?This match sould certainly suggest so, however looking through the game, I am afraid I have to think differently.I am not allegating anything but, considering the historic title hinged on the matches, one might question the validity of these matches.

Let's face it, even masters play stupid moves. In my last game against a strong IM (who beat me many times before), I won when he blundered a pawn in the middlegame on an elementary tactic. My performance in that tournament was over 2800, although I got lucky versus the IM and was losing to a 1900 earlier. You tell me, should I be challenging Anand for the World Championship anytime soon? Obviously not. Likewise, I caution anyone before they look at one game or even one tournament result to draw such radical conclusions.

The broader picture shows a variety of wins by Nicholas Nip against many different opponents. He has an amazing 43% score in 45 games against players rated above 2200 USCF over the past two years. He's faced many California masters, from IMs to floored 2200s (Life Masters). He's beaten nine different masters, six of them in tournament play.

It is unfortunate that Nicholas Nip does not live in New York City and can't play titled players several times a week at G/30 tournaments. In fact, there are so few opportunities to play opponents rated over 2000 in our area without costly travel. That's where creativity becomes necessary to create opportunities. The Mechanics' Institute offered that opportunity to play against people who regularly spend time at the club. The USCF allows rated match play limited to 100 point rating gain and Nicholas stayed well within that boundary. (Historical note: match play was the only way to get the old Soviet master title.)

Finally, look at Dana Mackanzie's blog for a game from 1.5 years ago where Nicholas Nip won. I'll further post my own loss to Nicholas, which was far from a brilliancy. In fact, I will admit that I miscalculated and blundered in a favorable position--costing me both embarrassment and prize money. I strongly deny throwing the game, although I admit having a soft spot for this sweet kid.

Congratulations to all who play
well, win or lose. My view is that
master level chess can be played by
winners and losers. Nicholas Nip
plays well and should be congrat
-ulated. Our chess titles are
symbols of achievement, and
estimates of strong or weak play.
The specifics of when we achieve
these titles may seem amazing, but
every one's circumstance is
different. Is Nicholas the best
young player in the country for his
age? One may argue yes or no, but
we must acknowledge that he is
estimated to be strong based on
recent achievement. Nicholas Nip's
family and coaches should be
congratulated for helping(within
the USCF rules) Nicholas to
navigate his own path or
circumstance. Good Job Nicholas,
and keep up the good work!!