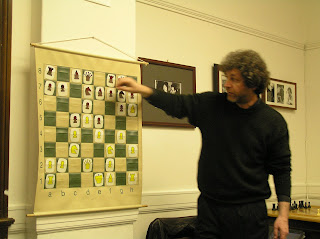 Grandmaster Gregory Kaidanov, ranked #5 in the United States at 2697 USCF and 2604 FIDE, visited the Mechanics' Institute Chess Club on Sunday, March 2. Not only is he a strong and active tournament player, he enjoys the reputation as one of America's best chess teachers. In San Francisco for the day, Kaidanov taught a master class to Northern California's most talented juniors and gave a free public lecture prior to the final round of an amateur tournament.

During the master class in the morning, the veteran Grandmaster reviewed some of his own games from the recent Moscow Open. He focused on the thinking process required to first generate reasonable candidate moves and then calculate the best lines. It was a difficult class for all; one self-proclaimed genius in the audience would miss an obvious zwischenzug in his variation. Even the GM was not immune to self-criticism; he shared the hilarious yet humiliating story of a legally blind Russian FM rated 2500 FIDE who outplayed him with black (a draw) and later lectured Kaidanov on finer points of positional strategy! Perhaps appropriately, the public lecture in the afternoon focused on psychology in chess and the chess teacher's role in identifying weaknesses in a student's personality.

The ten students invited for the class included several of America's best for their age. Often overlooked from the East Coast, these California kids can hold their own against anyone across the country and even the world. Four of the participants have held the #1 or #2 national ranking for their age in recent months; six are presently in the top 10. All are rated over 2000 USCF or have performed at that level in recent tournaments.

(Thanks to Yian Liou's parents for taking the photographs. The kids in the lower photo are, from left to right: Gregory, Adam, Yian, Alan, Daniel and Rohan. I am privileged to work with the first five.)