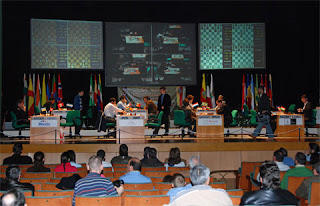 (The Linares tournament is held at the Teatro Cervantes in the heart of the city. Participants play on the stage with large video displays for the audience to follow the action. Photo from ChessBase website.)
After five days off to allow players and staff to travel across the Atlantic Ocean, the "Wimbledon of chess" has resumed in its traditional venue: the southern Spanish city of Linares. Fortunately for all chess fans around the world, the unbelievable fighting spirit has carried over from the first half of action in Morelia. Three of the four contests today were decisive, including one win by black. Perhaps the most complicated game today was the lone peaceful result, although regretably it ended with an agreement to draw by mutual fear when the position still had plenty of play remaining.

(Click on the links to view wins by Anand and Carlsen in the Chess Publisher game viewer.)

With these results, Anand extends his lead to a full point at 5.5 out of 8. Aronian and Carlsen are now tied for second place at 4.5. Rounds 9 and 10 are scheduled for Friday and Saturday, beginning at 7am PST. My students may want to follow the action on ICC on Saturday morning, with daily live audio commentary (Grandmasters!) by ChessFM. Note: the games often don't get exciting until the third or fourth hour of play, meaning after 9am PST. Sunday is a rest day for the players.

Update on Friday evening: Round 9 saw two decisive games: Carlsen outplayed Shirov while Ivanchuk beat Leko. Anand remains the leader at 6.0 out of 9, with Carlsen merely 0.5 behind. Guess who plays on Saturday? Anand vs Carlsen. Stay tuned for fireworks!