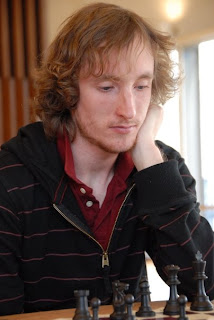 I updated the Fpawn Rating List for the April USCF supplement. Since my last blog post in December, the names at the top of the list remain largely unchanged.

However, the ratings continue to inch upwards with every month. In fact, my students gained an average of +39 points since the December supplement just four months ago, with 19 gaining points and only 6 posting small losses. Kudos to the following big winners.

Largest Rating Gain (Past 4 Months)
Special kudos to Saratoga High School chess team senior Jeff Young (see photo by Richard Shorman) for cracking 2000 at this year's People's Tournament, an achievement that in my opinion was long overdue. He was rated 1173 when I began teaching him in November 2003. Jeff's most memorable win came at the 2006 National High School championship when he crushed 2437 rated IM-elect Salvijus Bercys.
Posted by Michael Aigner at 3:14 PM