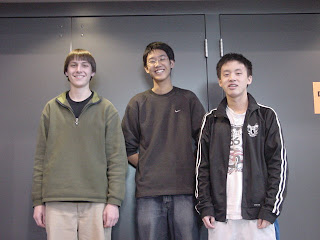 (Nationals are fun! Here's a photo of NM Daniel Schwarz, Marvin Shu and David Chock after the last round at the 2007 National High School in Kansas City.)

A total of 1221 eager chess players plus an equal number of parents and coaches descended on Atlanta last weekend for the National High School Championships. For three days, teenagers from around the country competed for top honors in what must be one of the fiercest chess competitions anywhere. As NM Jonathan Hilton found out, upsets abound so frequently that ratings mean almost nothing. In fact, almost all of the top seeds lost at least once to someone lower rated, or at minimum picked up a couple of draws.

Only one player escaped the carnage unscathed. Congratulations to national champion FM Daniel Yeager (2347), an 11th grader from Pennsylvania. He faced two A players, four experts and one master, beating them all for a perfect 7-0 score. Four players tied for second place at 6.0/7: Michael Thaler (2152) of New York, NM Warren Harper (2322) of Texas, Edward Lu (2194) of Virginia and Ilan Meerovich (2130) of Illinois. My friend FM Robby Adamson (BLITZMASTER on ICC), who whined to me about his students' performance on Saturday night, seemed more content on Sunday after the Catalina Foothills High School players rallied to win top team honors for the third time in four years.

Four players from CalChess competed in Georgia. Only Steven Zierk scored the 5.5 points required to earn a nice trophy; he ended up in 20th place. Special kudos to Mukund Chillakanti for starting out strong (beating two experts) and finishing strong (drawing with two more experts). Mukund achieved an impressive 2075 performance and gained 45 rating points to crack 1900 USCF. Watch out for this kid at states next month! Check out the ratings report for all of the statistics from the tournament. The National Elementary Championships in Pittsburgh on May 9-11 will be the final scholastic nationals for the 2007-08 school year. This event will attract over 2000 chess players. Next year is special--all of three of the nationals will take place simultaneously under one roof. SuperNationals IV is scheduled for April 3-5, 2009 at the Opryland Resort and Convention Center in Nashville. I'll be there, will you? Mark your calendar now!
Posted by Michael Aigner at 10:13 AM