Toto, We're Not in California Anymore 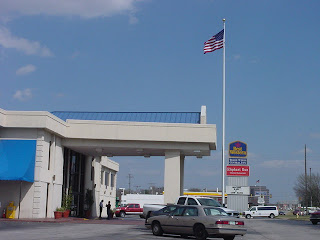 After a five hour flight from Sacramento via Phoenix, I arrived in Tulsa, Oklahoma for the US Championship Qualifier Open. Actually, I have been in town for 24 hours already to rest for the big weekend, but I spent the first night near the airport before checking into the tournament venue today. The event will be held at the Best Western Trade Winds Central (see photo above) on the southern side of Tulsa. My first impression of the hotel was quite positive and my room is quite comfortable. In fact, I have both a microwave and a refrigerator--and I've stocked up on food for between rounds or at night.
The chess tournament begins on Friday at noon CDT. Unfortunately, there will not be any internet coverage as far as I am aware. The time control is G/90 with a 30 seconds per move increment. In effect, a 60 move game may last up to four hours. Two rounds are scheduled for Friday, three (!) on Saturday and the last two on Sunday. Some players will request a bye for round 5 on Saturday evening, but I have not yet decided.
Seven players will qualify for the final field of 24 in the 2008 Frank K. Berry US Championship, which has once again been sponsored by the generosity of <drum roll please> Frank Berry. Three more players chosen by the organizing committee will receive a wild card invitation. Considering that the field of about 100 players will comprise of at least 8 Grandmasters and 13 International Masters, the odds of qualifying are quite slim unless you're rated at least 2400. I predict a score of 5.0/7 will earn a qualification spot, with possibly one or two players getting in with 4.5 and good tiebreaks.
I am playing for fun and to learn something. My student, FM Danya Naroditsky, signed up to gain experience against strong opponents, but after his success in Reno last weekend, I am sure that now he dreams of achieving even greater success here in Tulsa. Many other players with ties to Northern California will participate: GM Alex Yermolinsky (who moved to South Dakota late last year), IM Josh Friedel (who moved back to New Hampshire), IM Vinay Bhat, IM David Pruess, IM Dmitry Zilberstein, NM Sam Shankland and IM Walter Shipman. Will anyone qualify? Stay tuned!
For more background, check out the wonderful Qualifier Open Preview written for Chess Life Online by Tom Braunlich. Or read the statistics presented by Northern California expert Dana Mackenzie in his fine chess blog. IM Ben Finegold also has a good blog.
Posted by Michael Aigner at 7:04 PM