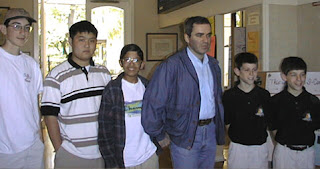 The lastest poll has closed and it is time to tabulate the results. If you had the resources to invite a famous modern chess player to lecture and host a simul in the Bay Area, whom would it be? Thanks to the 76 people who voted over two weeks.

These results reflect the rating and reputation of the players themselves. Garry Kasparov was the world's top rated player for about 20 years until he retired three years ago. Since then, Viswanathan Anand has taken over the pinnacle of chess. However, 17 year old rising star Magnus Carlsen is hot on his heels and will be ranked about 5th in the world after successes at Corus (tied for 1st) and Linares (2nd place) during the first three months of 2008. The top American players, Gata Kamsky and Hikaru Nakamura, each received 7% of the votes in this unscientific poll. Last place fell to Veselin Topalov, who failed to garner a single vote after his role in the infamous "ToiletGate" scandal of 2006.

Given a choice between Kasparov and Anand, I would pick the Indian native Anand for one reason: Kasparov already visited the Bay Area once in 1999, drawing an overflow crowd to Stanford University for a discussion about the limits of human performance in chess. Perhaps many techies in the audience of 500+ came to see the man who lost to the IBM supercomputer Deep Blue just two years earlier. I participated behind the scenes, including a formal dinner in Palo Alto, and even had the honor to introduce the World Champion at a Q&A session with many of the Bay Area's elite juniors.