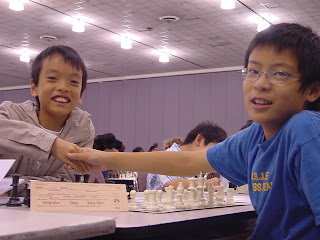 (As Salman Azhar commented at the awards ceremony, many of the top players in Northern California are friends with their rivals. Top 4-6 players Yian Liou on left and James Kwok are both in a good mood as they shake hands before their round 5 matchup.)

Although major upsets shook up many other sections at the CalChess Scholastics, that was not the case in the 4-6 Varsity when the top four seeds all finished in the top five spots. Rated nearly 200 points above anyone else and ranked #6 in the country for age 10, Yian Liou took his seat at the top board on Saturday morning and stayed there throughout the weekend, taking clear 1st place. He did surrender a half point in round 5 against friend and second seed James Kwok. This draw allowed Aamir Azhar to take the lead going into the final round, but not unexpectedly, Aamir lost to much higher rated Yian in the battle for 1st place. Nonetheless, Aamir managed to squeak ahead of James on tiebreak points. The final person to tie for 2nd place with a score of 5.0 was James' school teammate Jerry Wu, who improved his rating by 100 points with a strong result.

I am proud to say that it is a real pleasure working with all three kids: Yian, James and Aamir. In particular, I have watched Yian grow up from a shy 8 year old rated about 1200 to an outgoing and confident 10 year old rated over 1900. If he didn't live in the shadows of Danya Naroditsky and Nicholas Nip, there's no doubt that Yian would be the local star. Fortunately, Yian has the opportunity to study with Danya, Nicholas and other elite Bay Area kids at the series of Grandmaster seminars sponsored by the Mechanics' Institute. 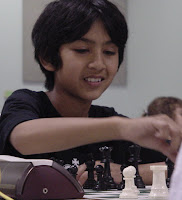 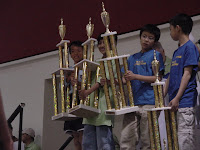 Posted by Michael Aigner at 9:00 AM

While you were in Chicago, I was playing at the (very small) Memorial Day Classic in Santa Clara. I got to see Yian Liou play for the first time, and I was quite impressed. He scored 2/4 in the Master/Expert section before taking half-point byes in the last two rounds. (He must have had other plans for Memorial Day.)

High points: He did a wonderful job of saving a draw in a 2-pawns down R+P endgame against Steve Gaffagan. The two pawns were a d- and f-pawn, so it should have been a win for Gaffagan. You would never have thought Yian was losing, though--he was completely unflappable.

Low points: He got completely outplayed positionally by Steven Zierk, and played as if he was in a hurry to catch a bus. The two of them were already on move 27 before my opponent even arrived (admittedly, my opponent was half an hour late). Is there any way that you can explain to Yian the value of taking your time before you get into a lost position?

On the other hand, I love the confidence of youth. Better to zip through the game thinking you're invulnerable than to writhe around in indecision and get in time trouble every game, like certain players I know (i.e., me).