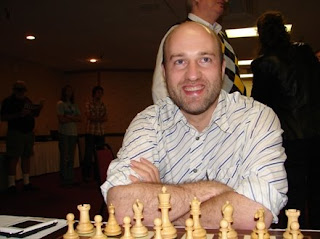 (Defending US Champion GM Alexander Shabalov smiles for the camera.)

The 2008 Frank K. Berry US Championship begins next Tuesday, May 13 in Tulsa, Oklahoma. A field of 24 players (plus 10 women) was selected either by rating, by qualification or by wild card. As the MonRoi website eloquently points out, the tournament "dates back to 1845 and includes among its victors such famous champions of the past as Morphy, Pillsbury, Marshall, Reshevsky and the late Bobby Fischer."

For the second year, Chess Life Online hosts an exciting Fantasy Contest to predict the best team of seven players in the US Championship (men) and US Women's Championship. Each fantasy team includes exactly seven distinct players of average rating at most 2555. To ensure fair comparisons between the men's and women's tournaments, 278 points were added to the rating of each lady. Your score for each of the nine rounds is the sum of the results of all seven players on your team. Prizes include a MonRoi Personal Chess Manager, a board signed by the players, USCF membership extensions and daily books!

Northern Californians may wish to cheer for the local delegation: IM Josh Friedel, IM David Pruess, NM Sam Shankland and WIM Batchimeg Tuvshintugs. Some readers still consider GM Alex Yermolinsky to be a member of the home team even though he moved to South Dakota. If you choose these five players, your last two team members may average up to 2708. Of course, you may predict that Josh will once again lose with R+K vs N+K or that Shanky may lose focus amongst so many women--feel free to be creative with your team choices! I have picked my lineup. Have you? Login now to start!

Your picture of Shabalov gives me an evil idea... Instead of dividing the US Championship into men's and women's divisions, we should have two different divisions: With Hair and Without Hair. In order to qualify for the latter division, you have to either be bald or shave your head. Women are welcome to participate in the Without Hair division, but their scalps must be clean-shaven.

I would do it!
Dana Mackenzie

ROFL! However, I'm having trouble imagining Shanky with a shaved head.