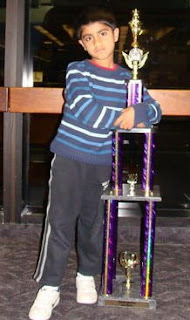 He is just 5 years old but can fork your king and queen faster than you can blink an eye. His chess rating is over 1000 at an age when some kids learn how to count to 10. Instead of learning the ABC's, he studies en passant, opposition, zwischenzug and prophylaxis. He won't take AP exams for another twelve years, but he already understands French, Danish, Italian and Sicilian.

He fears nobody on the 64 squares and is eager to challenge opponents his age and even those a dozen times older. Most importantly, he loves to play the royal game! There's no doubt that his name will be one that the Bay Area chess community will remember for years to come.

Congratulations to Arun Khemani, the Kindergarten champion at both the CalChess Grade Level in Stockton and the National K-12 in Orlando! As the photo on the left shows, the organizers in Orlando specially designed the first place trophy to match Arun in height.

The photo below shows Arun before his last round game against top rated Awonder Liang from Wisconsin. Arun (playing white) needed to win in order to tie for first and he succeeded! The second picture shows five smiling Bay Area chess stars after the awards ceremony: Lindsey Canessa, John Canessa, Arun Khemani, Cameron Wheeler and Rayan Taghizadeh. Kudos to all, especially to coach Ted Castro! 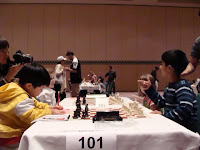