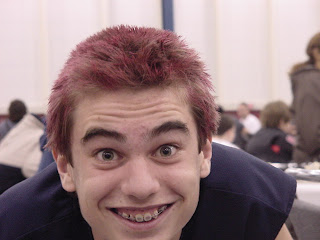 (Sam goes pink! At the 2005 National Grade Level Championships in Houston, TX, Sam Shankland outdid even his eccentric reputation by turning up for a round with a pink hairdo. How on earth could this punk earn the IM title just three years later!?)

After several corrections, the USCF has finally posted the December Top 100 lists. This supplement includes events rated by November 7, with an age cutoff on November 1.

The big news this month is that FIVE local players are now ranked #1 for their age. The readers of this blog have no doubt become accustomed to seeing FM Daniel Naroditsky (age 12) and NM Nicholas Nip (age 10) ranked at the top. Recently, Samuel Sevian (age 7) moved to the Bay Area and became an active participant in local tournaments. By the freak timing of birthdays, NM Gregory Young (age 13) assumes the top spot for his age each year in December, when IM Ray Robson turns 14 in late October and FM Naroditsky remains 12 until early November. (Remember that the magic date for these rankings is November 1.)

The final CalChess member to earn the #1 ranking is a well-deserving newcomer: World U18 co-Champion IM Sam Shankland (age 17). By gaining over 150 rating points and receiving the IM title, "Shankypanky" distinguished himself over the past year. In fact, the high school senior is now ranked #3 in the nation for K-12, behind only IM Robert Hess from New York and IM Robson from Florida. He's come a long ways since those days of pink hair.

The CalChess Top 20 lists have not been updated for the new supplement, but I can confirm the following youngsters as the Top 5 for 11 & under and age 12-17. I have had the personal honor of working with half of these talented students over the years.