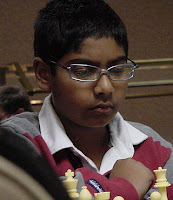 Here's a somewhat belated recognition to my three students who played at the CalChess Grade Level Championships in Stockton on December 6-7. A total of 342 intrepid young players arrived at the University of the Pacific to compete for the title of state champion in one of 11 sections ranging from Kindergarten to High School. Perhaps the competition was lighter than the CalChess Scholastics in the spring because none of the local 1800+ rated players attended, but don't tell that to those who worked hard for their trophies.

Two of my students took home 1st place trophies and a third got 4th place. Congrats to 7th grade champion Aamir Azhar and 9th grade champion Suraj Nair! Honorable mention goes to Michael Meng for finishing just half a point behind the winners in the tough 6th grade section.
Click this link for the USCF rating report. Many thanks to Chief TD John McCumiskey, the entire directing staff and the North Stockton Rotary for spending their time preparing for and running this annual tournament. I still have faint hope that someone who attended the event will write a summary article for the CalChess website.
Posted by Michael Aigner at 10:18 AM