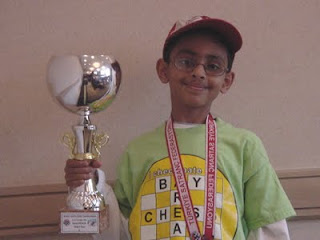 Here is a kid who trots around the world with his father, having discovered the fountain of youth at the chessboard. He brought home medallions of gold and silver from his conquests in far away lands such as Argentina and Turkey. At home, he has become a veteran of adult tournaments, playing in them since his sixth birthday. While playing, he is a wizard who may checkmate before you know what hit you! His infectious smile brightens any room that he enters, earning attention from 500s and 2500s alike. He was ranked #1 in the nation for age 7 and currently checks in at #2 for age 8. Now he is #1 in the Americas and #2 in the World, both under age 8.

To those of us who know him well, his name is simply Tanuj. To everyone else, his name now comes with a

set of initials: FM Tanuj Vasudeva. As in FIDE Master, a lifetime title in the World Chess Federation. By winning the Pan American Championship Under 8 in Argentina this summer, he automatically became the youngest FM in USCF history and currently the youngest in the world. Not skipping a beat, Tanuj followed up 9-0 at the Pan Am with an even more impressive silver medal at the World Yo 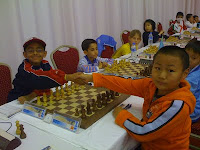 uth Under 8 in Turkey. Thanks to his father Tarun for the photos from Turkey at left and right. Tanuj became the Bay Area's third medalist in as many years at World Youth, behind FM Danya Naroditsky (gold in Under 12 in 2007) and IM Sam Shankland (bronze in Under 18 in 2008).
Tanuj joins a rich tradition of young masters in the San Francisco Bay Area, dating back to 1995 when 10 year olds Jordy Mont-Reynaud and Vinay Bhat both broke the USCF's youngest master record in short succession. A year and a half ago, Nicholas Nip lowered the mark even further, cracking 2200 a month before his 10th birthday! At 8 1/2 years old, Tanuj has a shot at this hallowed record too. However, it seems likely that another talented Bay Area kid, Samuel Sevian, about half a year older and already rated 2123, might get there first! Stay tuned! Best of luck to Tanuj, Samuel and all of the other kids who aim for the stars.

For a sample of Tanuj's playing style, check out this ruthless attacking game from the final round of the World Youth. His opponent is Hamzah Amier of Malaysia.