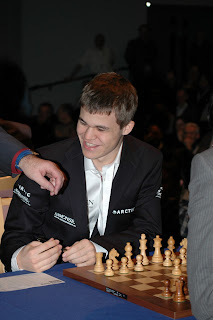 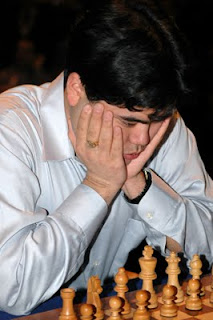 The organizers of the 2009 London Chess Classic invited an intriguing group of eight players to the capital of England, including four from the home country plus four foreigners. The average FIDE rating is impressive at 2696. The three veterans were former World Champion Vladimir Kramnik and a pair of Englishmen who have been among the elite for many years: Nigel Short and Michael Adams. Most of the media attention, however, has focused on the younger generation, in particular two stars.
A growing number of chess aficionados around the globe see Carlsen as heir apparent to the throne of our royal game. Over the years, the handsome young Norwegian attracted a sizable sponsorship that other Grandmasters only can dream of. His coach is the legendary maestro Garry Kasparov, the undisputed #1 player in the World for 20 years. Imagine what Kramnik must be thinking: I thought Kasparov retired four years ago, but now I face him again through his pupil Carlsen! Read Magnus' blog here.
The young two-time US Champion has a strong following among American players, some who think he may become the next Bobby Fischer. Playing under the username "Smallville" on the Internet Chess Club, Nakamura holds records for highest rating in every category except for chess variants. His official FIDE rating climbed steadily and he is now ranked in the top 25 of the World. Playing in London and then Corus A next month, Nakamura hopes to convince skeptics that he belongs among the elite. Check out Hikaru's blog here or order his hot new book Bullet Chess: One Minute to Mate online at Amazon.

On Saturday, Nakamura plays against Carlsen for the first time at a classical (slow) time control. They actually squared off in the final round of a blitz tournament two weeks ago in Norway, where Nakamura prevailed by 3:1. Carlsen will definitely be eager for revenge with the white pieces. Coming off a d 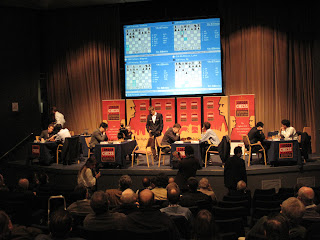 ay of rest, I wonder what special preparation Carlsen and Kasparov will have cooked up?

The game begins at 6am Pacific time, but the tension typically peaks in the third or fourth hour of play. To watch, log into ICC and open the Events list (BlitzIn) or select Events tab on the Activities Console (Dasher). If necessary, navigate using the Window menu at the top. You may also examine the completed game later in the day from the Events list.