No IM Norm for Fpawn 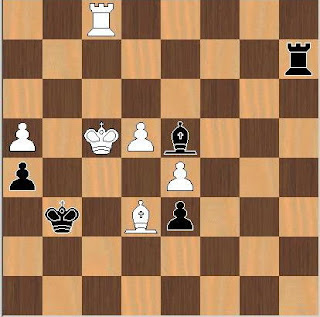 (Black to move and win! Not all opposite bishop endgames are automatically drawn. This position arose in my game on Saturday evening against FM Richard Lobo. The main variation is a mate in 3, although white can give up his bishop to prevent checkmate.)

First of all, thank you to all of my fans who have left comments, either on this blog or per email. I am glad that people actually read this blog and am amazed to see folks from the East Coast or Canada who visit what is intended to be a Northern California blog. Welcome!

Unfortunately, my IM norm hunt came screeching to an end last weekend at the Mechanics' Institute in San Francisco. Simply said, if you seek to earn a norm, then you cannot lose with the white pieces--and certainly not twice in the same tournament. The Slav opening in my game against FM Bela Evans (2279 FIDE) did not go as planned and, after castling the wrong way on move 14, I was already strategically busted. My opponent left no doubt who was the better player that day and I resigned shortly after reaching move 40.

Now needing four straight wins for an IM norm, I earned the required result against FM Richard Lobo (2261 FIDE) as black in the Sveshnikov variation. Perhaps the opposite colored bishop endgame was objectively drawn, but there is no doubt that white must play more actively than he did in the game. His position was on life support already when he blundered into checkmate on move 51 (see diagram at the top of this article).

Alas, my last hope ended when I lost the very next day to the top seed in the tournament, IM Vladimir Mezentsev (2400 FIDE). He surprised me in the opening, although I managed to get some compensation for the pawn that I lost. At the very least, all of my pieces were active. Once again, it was not my day and I went down in flames in a complex endgame of two minor pieces against a rook. The improvement 43... Nd7 (instead of Kd5) gives black a significant advantage due to his dangerous g+h pawns.

Oh well, such is life. At least the kids, especially NM Gregory Young (3.0/4) and FM Danya Naroditsky (1.5/2) still have a legitimate shot at making a norm in the next two weeks. I play again on Tuesday as black against IM Ricardo DeGuzman. I have little at stake now, except to try to improve my "minus 20" lifetime record against him! Yes, after 30 games, I have 1 win, 8 draws and a whopping 21 losses to the Bay Area's resident 500 lb gorilla. Wish us all luck!
Posted by Michael Aigner at 5:34 PM