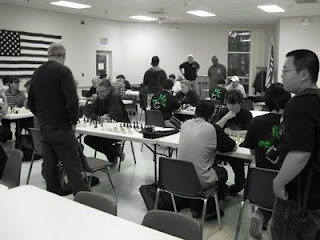 Another sad sign of the times from the Sacramento Chess Club:

As many of you are aware, the City of Sacramento has been suffering from budget problems for several years now. In 2008, those budget issues directly affected the Sacramento Chess Club, requiring us to pay rent to use the Redwood Room of the Hart Senior Center. Through the donation of generous benefactors, the Club has been able to continue to rent the space at the Hart Senior Center. Since then, the Club has also looked at the options available, with the primary focus being to avoid charging members dues, something the Club has been able to do throughout most of its existence, and remain in or close to the downtown area.

The cold, hard reality of the state's fiscal catastrophe will be felt yet again. Ever since I began playing competitive chess in 1994,

Sacramento was my home club. Each Wednesday night, 30 up to nearly 100 players would drop by the Hart Senior Center on J Street between 27th and 28th Street to play chess. The club was quite fortunate to meet rent free until the summer of 2008. In turn, the weekly tournaments (G/10 and G/60 were most popular) only cost $2 or $5 per player. Since the City of Sacramento began charging a steep rental fee, the club cannot keep going; it will have to find a cheaper venue for meetings.

This story mirrors the harsh reality at many other small chess clubs around the country. That's why many meet at fast food places, eager for extra business in the evenings. Unfortunately, most restaurants can't accommodate a club as large as Sacramento. I would really be sad to see a club whose history dates back to 1934 close. Hopefully that won't be necessary.

I can empathize with that. We at Bay Area Chess have a tough time keeping up with our rent and other overheads.