The leaner and meaner FM Sam Shankland (photo at left by Shorman) once again demonstrated that he is a primordial force to be reckoned with in Northern California chess. Although he has yet to win the CalChess Scholastics, "Shanky" can now call himself State Champion after his success over Labor Day weekend at the Golden Gateway Holiday Inn in San Francisco. He scored an undefeated 5.0 out of 6, including this refutation of the St. George's opening essayed by IM Andrei Florean. Shankland drew twice over the weekend against both of the players who tied for second place at 4.5: NM Daniel Schwarz and IM Dmitry Zilberstein. Congratulations to Sam on a successful summer that included an IM norm at the World Open, top honors at Agoura Hills, impressive wins against Grandmasters Shabalov and Erenburg, and last but not least a state title!

Final standings of Master section
The weekend was marked by a slew of upsets by Northern California's pool of talented younger players against internationally titled masters. The two players that everyone expected to battle for top honors didn't even stay in contention!? GM-elect Vinay Bhat drew twice with teenage masters Steven Zierk and Gregory Young before losing to Cal Poly San Luis Obispo sophomore NM Drake Wang. Joining the upset parade, the Bay Area's most active titled player, IM Ricardo DeGuzman, castled short against a pair of my students, losing to NM Schwarz for the second time this year before also losing to NM Zierk. Even 11 year old expert Yian Liou got into the act by beating veteran IM Walter Shipman for the first IM scalp of his young life! Considering all these upsets, perhaps the smartest person this weekend was two-time defending state champion GM-elect Josh Friedel, who wisely took a break from chess after a busy summer of tournaments.

(Photo by Shorman of the top board action in round 2. On board 1, NM Zierk played GM-elect Bhat while on board 2, IM Zilberstein faced NM Young. Both games were drawn.) 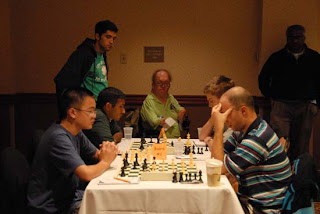 The annual CalChess Labor Day Festival drew a total of 160 players in six sections and paid out the advertised prize fund of about $5,500. Organizer Richard Koepcke received assistance from CalChess President and Chief TD Tom Langland and NTD John McCumiskey. Thanks guys for a smooth and enjoyable weekend!

While I have concentrated on the Master section in this story, I wish to close by recognizing the various champions in lower divisions. Kudos to them as well!
Final standings: http://sacramentochessclub.org/weekend_events/2008laborday.htm
Photos by Richard Shorman on ChessDryad.
Photos by Michael Aigner on Flickr.
Posted by Michael Aigner at 9:40 PM

What are you feeding those kids !?
That is a strong group !