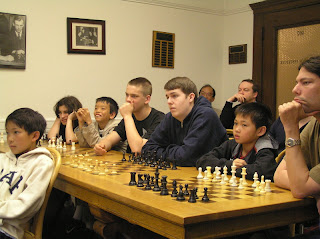 (This photo, taken over the summer at a session of the San Francisco School of Chess, includes three gold medalists, one silver medalist and one bronze medalist.)

The USCF has posted the October Top 100 lists a few days early. This rating supplement includes tournaments rated by September 5, thus including Labor Day weekend. In a sign of the increasing dominance of Northern California scholastic chess, the number of local juniors ranked for their age increased to 99 in October (up from 93 in June) Check out the CalChess Top 100 lists for the complete rankings.

Eight kids have earned gold medals for being ranked in the top 5 of the nation for their age. Three are ranked #1 and two more are #2. Welcome to new Bay Area resident Samuel Sevian, a 7 year old formerly from Florida who sports an amazing rating of 1889! Samuel joins the elite club of Nicholas Nip and Daniel Naroditsky as top rated players for their age. Special kudos to Arun Khemani, who at 1047 is the top 5 year old in the nation! 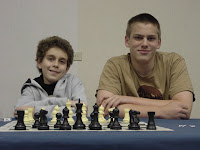 Players ranked in the top 10 and top 25 of the country also deserve a special recognition. The silver medal list has doubled in size this summer. The names shown in bold and italics are all current or former students of mine.

Also check out the Top 20 lists on the CalChess website. Can any of my readers believe that there are seven Bay Area kids in K-6 rated above 1800, including two over 2000? Another eight Elementary age kids are rated 1600 and up. The Junior High + High School rankings are topped by two FIDE Masters, two National Masters and an unprecedented seven experts. Incredibly, CalChess boasts 13 young players age 17 and younger who are rated over 2000, not including the five 18 year old masters who attend local colleges and universities!