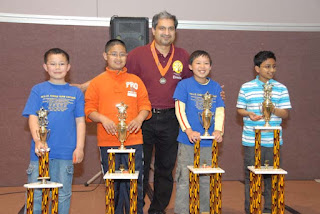 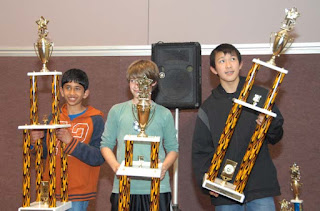 Here's wishing all players the best of skill this weekend at the 37th CalChess Scholastic Championship. If you're not experienced enough to win by skill alone, I also wish you an extra large serving of luck. Remember my favorite bit of advice: try your best and have fun!

For the many adults in attendance--directors, coaches and parents--I offer a generous potion of patience. You will need it! Don't forget to check your personal biases at the front door and let this weekend be filled with cheerful competition.

Frankly, I am a bit disappointed with the turnout to date. The advance entry list shows 762 entries, far less than the standard of 1000 achieved every year from 2001 to 2008. The attendance record of 1319 was established in 2006. I have heard many sad explanations for the downward trend, ranging from the economic recession to petty politics. Sigh! Addendum: The more I find out about a partial boycott, the sadder I become. What lesson do the kids learn from these adults who are acting like immature teens?

nly 12 out of 24 masters and experts signed up. What is wrong with this picture? This is the state championship, for Pete's sake! While I understand that 2300+ rated masters have bigger fish to fry, there's no excuse for nine experts to sit at home. Sigh!

Still, there are sufficient elite players signed up to make anyone sweat! The strongest section seems to be 6-8, featuring the defending champion, a master plus six experts, two former national champs and a former continental champ! I doubt I could win 6-8 even if they let me play. Note: The top high school student in 9-12 qualifies for the prestigious Denker Invitational and all co-champions in 6-8 earn a spot in a separate qualifier for the Barber Invitational. Both events take place at the US Open this August in Vancouver, WA. 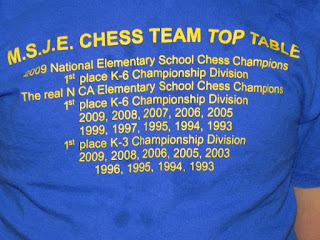